Origin of the Name

The image below is that of the 1603 will of Thomas Woody and comes from the Surrey Archæological Collections, Vol. XII, Part I, Roworth & Co., Ltd., London, 1894. It illustrates one of the research problems associated with family histo 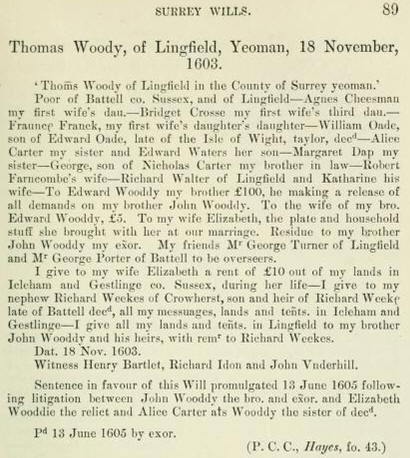 ry research in general and Woody, etc. surname research in particular. Notice the three different spellings of the name in the will and probate proceeding. This was not an uncommon occurrence at this period of time. In the 17th century the Woody, etc. surname was much more common in the British Isles than it is now. Today, the most common variation is Woodey; however, it has become a very rare surname. It is virtually impossible for me to find this name in books that focus on the etymology of surnames; however, an examination the ancient spelling and meaning of the word "wood" proved more interesting and perhaps productive. Woody was supposedly derived from the Ancient Anglo-Saxon two syllable word "wudu". The name and derivatives meant "the substance of trees"; i.e. wood, a forest and a tree. It was commonly used as a modifier, as in wudu-aelfenne (wood-elves) and wudu-aeppel (wood-apple).  Toward the end of the fourteenth century, wudu gradually became wode/woode, but retained the two syllable pronunciation. In his poetry, Geoffrey Chaucer made use of the rhyming potential of the two syllable word, but after his death in 1400, wode/woode became a one syllable word. Since most very early surnames were based on the bearer's occupation or residence, the word is found as part of many names; however, some of those people with the surname derived from the original wudu chose to retain the two syllable pronunciation. So, although the spelling has changed, the pronunciation of Woode/Woody/Woodie/Wooddy/Woodey has remained unchanged since the time of Chaucer. Although the name Wood is very common in the United Kingdom, Woody is very uncommon. The Woody surname is over 100 times more common in the United States than it is in the United Kingdom. It is also interesting that the surname Wudu is used by a very few people in the British Isles. Some very early English Woody's:  Roger Wody c. 1255; Thomas de la Wdhaye c. 1275; Robert atte Wodeheye c. 1333; John Woodye c. 1568.

In many cases, the transcription of old documents is a difficult task at best. As they are today, the writers and transcribers of documents were sometimes impatient and sloppy. What's more, before widespread literacy, the spelling of names was often left to the census taker, minister, clerk, priest, justice or other person that was recording the information. Today, the power of print provides weighty evidence to many researchers and finding the identical  information in several printed sources provides indisputable evidence. They seem to forget that almost all of what they read in print had to be transcribed from the hand written page. Although the great majority of transcribers strive to accurately decipher source documents, even they can and do disagree among themselves. So it should not come as a surprise that a wide variety of variations have been recorded for many surnames. What is somewhat surprising to us is that many literate English writing people were so seemingly indifferent to their spelling. As Bill Bryson writes: "Most people throughout much of the history of the English language have seemed remarkably unconcerned about the niceties of spelling -- even to the point of spelling one word two ways in the same sentence. People were even casual about their names. More than eighty spellings of Shakespeare's name have been found. Shakespeare himself did not spell the name the same way twice in any of his six known signatures and even spelled it two ways in one document, his will." Another good example of this indifference is the 1605 will of Thomas Woody noted above.
Some other variants that we have encountered are: Woody, Woodie, Woodey, Wooddy. Wooddie, Wooddey, Woodye, Wooddye, Woodyes, Woodde, Woodis, Woodia, Wodey, Woddey, Wody, Wodys, Woddie, Wodye, Woddye, Woady, Wuda, Wudy, deWoody and others. Additionally, The hand written capital letters of "W" and "M" were/are sometimes mistranscribed, so Woody and variants were recorded as Moody and variants, as well as the reverse. Also, Waddy and Woddy were/are also mistranscribed, in both directions.

Other Researchers of the John Woody of Goochland Co., Virginia Line
Including his sons, Henry Thomas and William Woody

Unpublished research paper. Anita Lotts of Albert Lea, Minnesota has researched the Wyatt Woody line in western North Carolina. One of her primary sources was The Heritage of the Toe River Valley by Lloyd Bailey.

Chips from the Woody Block - The Woody Family Descending from William Woody (1760-1817) by Jeri Davis Lipov, Columbia, Maryland, 1996. The descendants William's son, John Wooddy, of Arkansas. This research is available on microfilm from the LDS Family History Library as Film # 2055363 Item 1.

Several other Woody lines, unrelated by yDNA testing (no Common Male Ancestor),  have been researched:

In 1738, John Woody and Mary Lindley were married in Baltimore (later Harford) County Maryland. Slightly earlier in 1736, John was documented in Chester County, Pennsylvania, the home of Mary, and adjacent to Baltimore County, Maryland. The Woodys later moved to the Haw River region of North Carolina where John died. A starting point for this line might be Stream of Time and Kinfolk and Where They Lived by Vivian R. Woody. Although Vivian was a descendant of John and Mary's son James, she corresponded with several named descendants of the couples other sons and she included a chart of their  "Seven Sons" in Kinfolk and Where They Lived. Some of these entries are more informative than others.

Richard and Ann Woody came to Boston c. 1640 and their descendants are documented for several generations. There is a popular "Three John" theory that the John Woody, mentioned above, was a descendant of Richard and Ann. Unfortunately, professional research has failed to uncover any evidence at all to substantiate this theory. See Paul Revere and the World He Lived In by Esther Forbes.

William Woody and Lady Sarah Parcel first settled on the Potomac River c. 1750, but soon moved to North Carolina. The basis for any research is Revolutionary Soldiers, Jonathan Woody and Jacob Frederic Lagenauer, compiled by Ruth Lessley and Ruby Kansler as transcribed from the diary of W. C. Berry. This transcription is available on microfilm from the LDS Family History Library as Film # 1428709. A very through researcher of this line was Verl Fredrick Weight. His work is available as a Pedigree Resource File (Submission # 26672-0526106191613) on the LDS FamilySearch site and from the LDS Online Store as CD #129. Several descendants of William and Sarah have been yDNA tested. They also have an exact match with several other tested men with the Chumley surname and this has led some researchers to suggest that this line originated with an unknown male Chumley and a female Woody.

David Woody; Alias David Brooks, and his Agnates by McIver Woody M.D. - unpublished research paper. David Brooks moved from Virginia to Person County, North Carolina about 1785.  About 1804, he changed his name to David Woody. Most researchers think he was the son of a Brooks female and a Woody male; however, the yDNA of three of his descendants does not match any known yDNA tested Woody or Brooks. Research suggests that David was the son of a female Woody and an unknown male.

Other researchers who have contributed significant information to the above lines are: Hugh E. Whitted, R. H. Hutchison, Francis Woody Werking, J. Waldo Woody and Mary Dell Wallace, the author of a newsletter called The Woody Family Tree: Let's Climb it Together (available on microfilm from the LDS Family History Library as Film # 6100040) and James E. Smith, the author of Woody Cousins.

Obviously, some or all of these lines were in Virginia at same time as the Virginia Woody's. It is quite possible that some or all may be connected to the Woody/Wooddy lines that originated in New Kent County, Virginia. There are a few facts that suggest a connection; however, to my knowledge, there is not a shred of proof  to support this supposition.  In addition, recent yDNA evidence indicates that there were three completely unrelated Woody lines in Colonial America.

Please use your Back button to return to the home page.